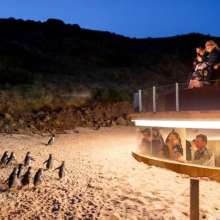 Monday, August 29, 2016 – 16:16
PENGUINS are a big winner in this year’s state budget with the iconic penguin parade set for a $48.2 million makeover.
The funding will allow an upgrade of the visitor’s centre and 8 hectares of penguin territory will be restored and preserved.It is hoped the commitment to be funded under the upcoming State Budget will add an extra 620 jobs, including 110 construction positions.The Phillip Island Penguin Parade is one of Victoria’s popular tourist attractions attracting 600,000 visitors a year.That figure is set to increase by more than 20 per cent over the next decade.Environment minister Lisa Neville welcomed the funding announcement.“Anyone who has visited the Penguin Parade knows just how special this natural spectacle is. It’s only right that they have the facilities to match.”Premier Daniel Andrews said the project “is a big win for jobs.”The $60 million project will see the old centre moved to provide a new breeding area for the birds.A new state of the art centre will be built further down the dunes to be finished in 2019.The nature parks have also invested $10 million for the upgrade.
Posted on December 6, 2017December 6, 2017Author The IslandCategories News and events